It is not the first diode that we analyze in this blog, the 1n4007 is a rectifier type diode, in this case, and one of the many Electronic components that you can use with Arduino. Cheap, discrete semiconductor elements that can have a multitude of applications.

For example, these rectifier diodes, like the 1n4007, they can help you to convert signal from AC to DC as in power supplies (as I explained in this other article), use them in other circuits where rectifications of the electrical signal are needed, in fixing circuits, voltage regulators, etc.

Rectifier diodes are solid-state devices made of semiconductor material that replaced vacuum valves for rectification of the electrical signal.

What is a rectifier diode?

Un rectifier diode, like the 1n4007, it is one of the types of diodes out there, and one of the oldest. It is one of the simplest, but its applications, as I have already mentioned, are many and make it quite important in the world of electronics.

In other words, put quite roughly, it is a kind of filter that would only allow positive cycles of a signal to pass, being able to discriminate the negatives. Imagine everything you could achieve with this ability ...

And for that to be possible, remember that these elements are manufactured to operate at a maximum frequency at which they will work properly, with a support for a maximum current or intensity in which it can conduct in the direct direction, and direct voltages e inverse maximum supported. Those datasheet factors They are the ones that you must take into account of the chosen model so as not to push it beyond its limits and that it works properly.

Like other diodes, it is based on a PN semiconductor junction, usually silicon, although there may be other semiconductors such as germanium. In general, they tend to withstand up to 200ºC at the junction, very high temperatures, with very low resistances and very low reverse voltage voltages.

El 1N4007 is a rectifier diode widely used in many current appliances, especially in power supplies to prevent a negative voltage supply from causing problems in a circuit that burns out due to reverse polarity, or for power supplies during the process of transforming the AC signal into DC , etc.

This diode withstands currents up to 1A continuously with a voltage that can go up to 700v. That leaves a wide range of action for a multitude of applications. In addition, it also supports specific peaks of reverse voltage of up to 1000v, and currents of 30A. 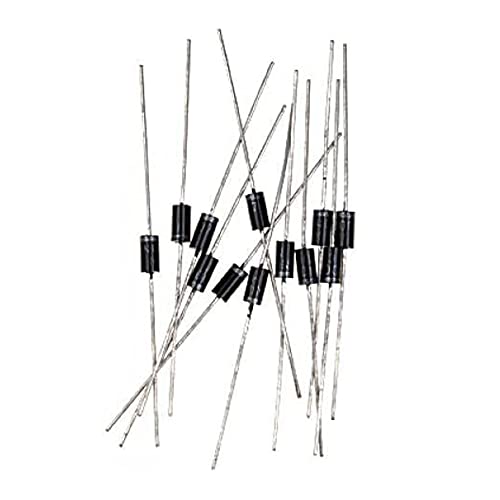 It is encapsulated in a package DO-41, generally, with its two typical terminals. As for other features that you should know are:

As for the your pinout, It is very simple. Earlier I said that it only had two pins. One of them is the cathode and the other is the anode. To be able to differentiate it, you must look at the gray stripe at one of its ends on the body of the 1n4007. That end of the strip is the one that corresponds to the cathode (-), while the other end is the anode (+).

For more information you can get all the details in the datasheet from the manufacturer of the specific component you have chosen. Here you have an example of it, but remember that there may be slight differences from each other, although most of the technical details are the same.

Price and where to buy

The price of this type of electronic components is extremely cheap, they only cost a few euro cents. Therefore, they are very affordable. You can find them in specialized electronics stores or buy them online in stores like Amazon. For example, here are some products that might interest you:

Before I already linked you to the article where I explained the operation of a power supply, but to see in a more visual way the use of a 1n4007 and how you can build your own power supply to learn about the basic principles of electronics and this component, I leave you this instructive video ...

For, more information, Can read the article in which I described these stages as soon as the power supply is fed from the mains of, for example, 220v AC, and a lower voltage DC power supply is output at its output ...

Full path to article: Free hardware » Electronic components » 1n4007: everything you need to know about this diode