El 2N2222 or PN2222 transistor It is another of the most used transistors together with the BC548. Therefore, if you like DIY and you are a maker, surely at some point you have needed one of these devices. In this case, the PN2222 is a low power silicon transistor and designed for linear amplification and switching applications.

The reason that it is so in demand is that it is good at amplifying small currents and small or medium voltages, in addition to being able to work with medium high frequencies. That means it has a general use and it is quite popular with radio amateurs. Those who are will know that it is one of the transistors used for the construction of the BITX transceiver, or that it allowed the Norcal ham radio club in 1999 to launch a challenge to build a radio transceiver with only 22 transistors of this type without any type of Additional IC.

Like BC548, it is manufactured using epitaxy processes. It is also a transistor bipolar and NPN type. At present it usually has several possible packages, such as the plastic TO-92, which is usually the most common way of presenting it and also others such as TO-18, SOT-23, SOT-223, etc.

What exactly is a transistor?

As radio or transistor it was named so because of this device we talked about, I would like to do a very brief introduction on what a transistor is and a little history. Transistors are nothing more than devices similar to switches and capable of amplifying the signal. That is, they are the substitutes for the primitive vacuum tubes or vacuum valves that gave so many problems.

These valves were similar to traditional bulbs, so they could blow out and needed to be replaced frequently. They were also large in size and did not allow the creation of small devices. The heat they generated was another problem as well. With the arrival of the solid state electronics, that is, of the semiconductors, allowed the creation of this type of devices much cheaper, smaller and more reliable.

The name of transistor comes from the union of transfer and resistor, that is, a transfer resistor in English. Remember that resistor is a resistor. In addition, as you know, the invention emerged in Europe with the first patents of the physicist Lilienfeld (1925). It was somewhat ahead of its time, since they found no practical applications for it in that decade or the next, and it was also a field-effect transistor, a more advanced concept even than bipolar ones.

Oskar Heil also made a similar device in Germany in 1934, and later Robert Pohl and Rudolf Hilsch would also do experiments related to this type of device at a German university. In an almost parallel way, in the United States in AT&T Bell Labs They were also doing unsuccessful experiments, until after World War II fortunes changed for them and when they returned from the European battlefield they came up with the solution by coming up with "refreshed" ideas.

John Bardeen, Wlater Brattain and William Shockley They took the credit by patenting the first transistor in history and winning the Nobel Prize. In 1948 they invented the contact transistor, a very large, very crude and impractical device that was expensive to manufacture and sometimes failed and had to be repositioned in some cases. From that point they would evolve to the current transistors.

But if you want to know how does it work exactly this device that revolutionized electronics and the technological world, Here is this GIF with a simile about the transistor and a hydraulic system, which I think you will not find better than this example to capture the idea of ​​how a transistor works:

It can be seen that when a current is supplied to the base of the NPN transistor the current passes from the collector to the emitter. But it does it amplified, since if you look at the image, the torrent of water from the base and the collector are added. It's a similar quite simple, although in the electronic system you should replace the water with electrons ...

If you want to see a somewhat more enlightening image from the point of view of the operation of the semiconductor zones, that is, of cargo carriers, here you have this other image:

In the case of a PNP it would be similar, but change the polarizations or ways of connecting the transistor.

The 2N2222A is encapsulated in metal type TO-18 and qualified for use in military applications (MIL-STD) due to its robustness, acceptable temperature range, etc. If we look at the datasheets provided by these fabrics, the characteristics that we are going to find in this transistor are: 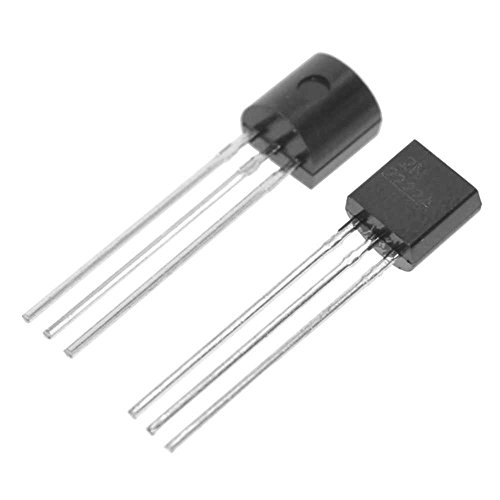 Un datasheet is a document, usually a PDF, with the detailed characteristics of the electronic device. They are created by the fabricnate itself with the peculiarities of its product, therefore, we can find that there are not the same parameters in two datasheets on a 2n2222 from different manufacturers. Here you can download some of them: