If you are a maker, you like DIY and electronics, surely you have ever needed to use a BC547 transistor. It is a bipolar junction transistor that was originally developed by Philips and Mullard between 1963 and 1966. Initially it was named with the BC108 nomenclature and had a TO-18 type metal encapsulation (Transistor Outline package - case style 18 ). That package was considerably more expensive than the plastic equivalent TO-92, but the heat dissipation is better in the former.

Later it would have a new plastic package and renamed with the code BC148. And it evolved from BC108, BC238, to what we now know as BC548 with an encapsulation cheaper type TO-92, and from here came variants such as the BC547. The differences between the series were basically encapsulated, being the same inside. In addition, for its acronym BC It shows that it is a silicon transistor (B), for low frequency (C).

There are also other designations such as the BF, but in this case it is used to identify the transistors used for RF (radio frequency), that is, those that achieve good gains at very high frequencies.

The BC547 belongs to the family of transistors with similar characteristics as the BC546, BC548, BC549 and BC550. They are all of the bipolar or bipolar junction type (BJT for Bipolar Junction Transistor). That is, they are not field effect transistors like FETs, light-controlled phototransistors, etc. These types of bipolar transistors are made of materials such as germanium, silicon or gallium arsenide. 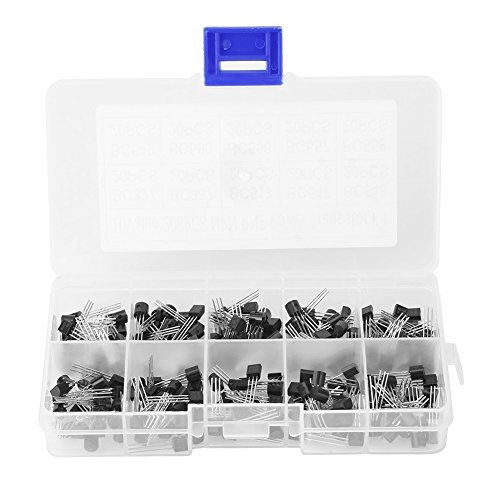 Kit of transistors of ...
No ratings
15,59€
View deals See features

That said, if we focus on family, the differences between all the members it is quite mild. The encapsulation of all is the same, the SOT54 or TO-92. But each one has been optimized for a specific type of task:

All of them have three pins, as is logical in transistors. To identify them, we must look at it from the chamfered or flat face of the encapsulation, that is, leaving the rounded face for the other side. Thus, from left to right the pins are: collector - base - emitter.

Once this is known, we will better understand how transistor BC works. In the specific case of the BC5xx, output currents of up to 100 mA. That is, this would be the maximum intensity that can flow between the collector and the emitter, controlled by the base as if it were a switch. In the case of the maximum accepted stresses, this varies depending on the model as we have seen.

Remember that the maximum current intensity of 100mA is only for the DC, since for the alternating current where there are point peaks of short duration it could go up to 200 mA without destroying the transistor. However, some manufacturers such as the mythical and historical Fairchild have even built BC547 models that can reach 500mA, even if it is not standard. So you can find perhaps datasheets of the BC547 with voltages somewhat variable to what is specified here ...

After learning about some things in common with family members, let's focus on some magnitudes and specific features for the BC547.

La current gain, when we talk about the common base, it is approximately the current gain from the emitter to the collector in the direct active region, always less than 1. In the case of the BC548, like its family brothers, they have a very good gain of between 110 and 800 hFE for direct current. This is usually specified with an extra letter at the end of the nomenclature that indicates the gain range considering the tolerance of the device. If there is no such letter then it could be any within the range I have given. For example:

That is, the manufacturer estimates that it will be between those ranges, but it is not known what exactly the real gain is, therefore we must worst case when we design the circuit. In this way, it is guaranteed that the circuit is functional even if the gain is the minimum of the range, as well as guaranteeing that the circuit would continue to work if we replace said transistor. Imagine that you have designed the circuit so that it works with a minimum of 200hFE and you have a BC547B but you decide to replace it with a BC547A or BC547, it may not reach that rate and it will not work ... On the other hand, if you do it so that it works with 110, either will work for you.

Kit of transistors of ...
No ratings
15,59€
View deals See features

These maximum frequencies will guarantee that the transistor amplify at least 1, since the higher the frequency, the lower the amplification of the transistor due to the capacitive part of it. Above those acceptable frequencies, the transistor could have very little or no gain, so it does not compensate.

I hope this post has helped you and the next will be PN2222.

Full path to article: Free hardware » General » BC547 transistor: everything you need to know