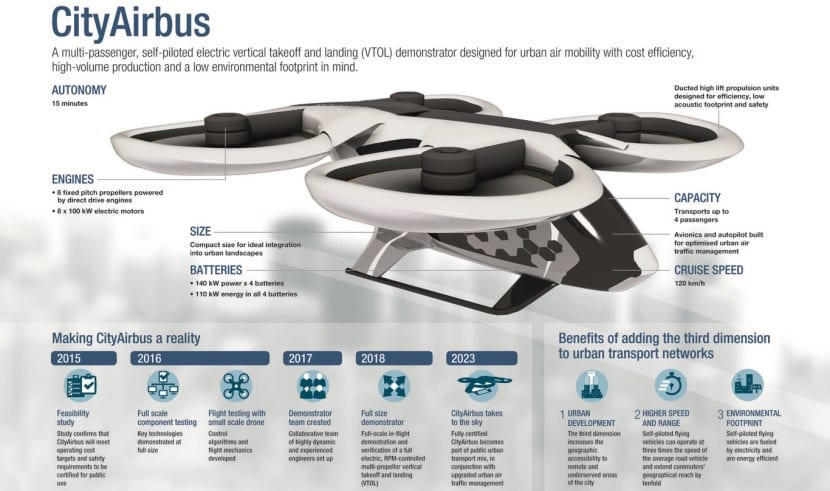 We have known for quite some time that a company of the magnitude of Airbus He was working on a project where he wanted to create a certain prototype of drone with which anyone could travel through the skies of a city. This prototype, despite the fact that many considered it canceled, is more alive than ever and we have the proof in the announcement made by the company itself where it is estimated that these drones will begin operating in 2018.

After all this waiting time, it finally seems that many of the details that intrigued us about this type of drones are clarified, especially if we consider that we are talking about a project where it was sought to create a completely autonomous aerial vehicle with the capacity to carry in its interior up to four people and their luggage. A project that has finally been baptized with the name of CityAirbus and that, as you can see below, seems to be much more developed than we thought.

Going into a little more detail, we find that each of the CityAirbus will be equipped with nothing less than four rotors, each one powered by two 100 kW electric motors while inside the prototype has nothing less than four batteries up to 140 kW capacity, enough to grant a autonomy of 15 minutes flight at a maximum speed of 120 km / h.

However, the limitation is once again on the part of the authorities, although Airbus has thought about how to solve this point making, at least for the moment and until the legislation is drafted, these drones have an expert pilot at your controls to control them so, for now, they would move as if it were an electric helicopter.