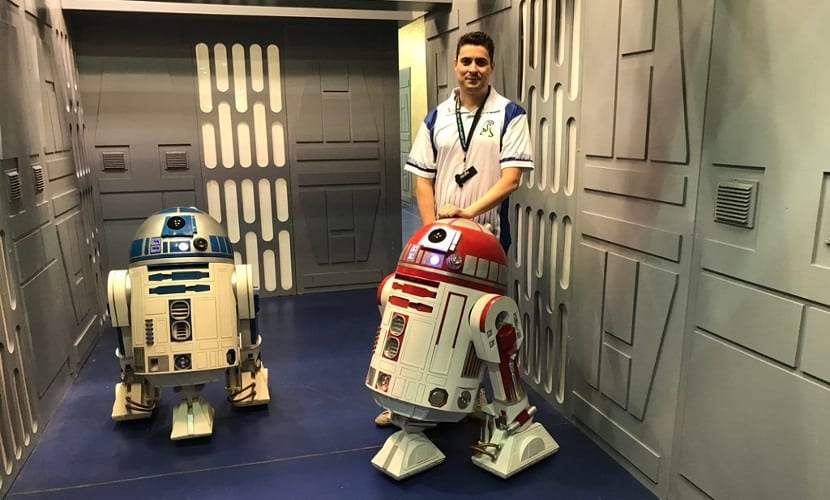 Star Wars lovers have found a way to channel their love of the Saga into Free Hardware. So there are many users who create or try to replicate the robots and drones that appear in the Star Wars movies. The most famous of all these robots is undoubtedly R2-D2, but there are other models that are being replicated. The last to get Lucasfilm's approval has been the R4-P17 robot, a robot that accompanied Obi-Wan Kenobi.

Alejandro Clavijo has developed a robot similar to R2-D2, with wood and aluminum. The brain of R4-P17 is made up of four Arduino boards, two of them Arduino UNO that manage the movements and the information of the sensors that the robot has inside. The other boards deal with tasks such as wireless management or the management of USB ports, ports that the artisan version of this robot has.

The R4-P17 robot is a fully functional model although it is not similar to the one shown in the movie. The R4-P17 created by Alejandro Clavijo runs correctly and emits lights, although It will not be able to process nor does it have sounds or voice like other robots in the Star Wars saga. However, the structure and appearance is so real that the company that produces and owns the Star Wars rights, Lucasfilm, has recognized and validated the project. A guarantee that few Free Hardware projects have achieved in this time.

And for those who like to create functional replicas, this model can be reproduced, improved or customized thanks to the construction guide that we can find in the official website of the project. A guide that explains step by step, with images and all the necessary code, the construction of R4-P17.

Full path to article: Free hardware » Arduino » They create a replica of the robot R4-P17 from Star Wars