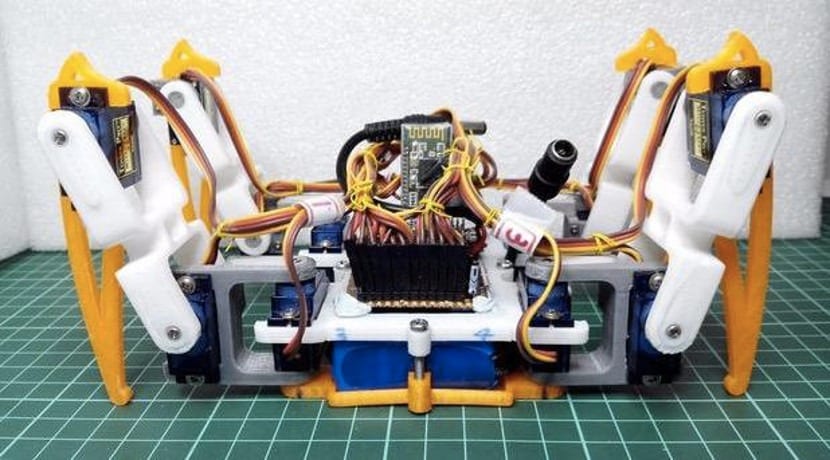 It seems that after the fashion of drones, now it is the turn of spider robots. Lately they are leaving many spider robots, also called quadrobots or quadruped robots that are characterized by having several legs as if they were a spider.

A user recently posted designs and instructions for building a homemade spider robot. This user is called RegisHsu who has built a spider robot with a 3D printer and an Arduino board. The printer in particular is a Prusa I3, an interesting model since it may be the most affordable 3D printer in the world.

The Arduino board selected by RegisHsu is a Arduino Pro Mini. Both components have created this spider robot which is built in only 14 steps although it takes more than 12 hours to have it, the reason for this is the waiting time to print all the parts. Once you have printed the pieces, in the colors you want, the assembly process is simple. Even so, there are many guides and videos to accomplish this task.

Although Arduino Pro Mini is the used board, this spider robot allows to use any other Arduino board

The good thing about this spider robot is that when it is printed on a 3D printer and with the plans fully released, each one can make the modifications it deems appropriate, from adding a camera to changing the servo motors or the Arduino board for other more powerful models. Without thereby damaging the original model.

For those who are liking what they have read, in Instructables you find a repository with the project tutorial and in Thingiverse you will find all the files to print the necessary parts. Also in RegisHsu's blog You will find not only all the information available on this final version of the spider robot but also information on previous models and experiments that the creator himself carried out to arrive at this final spider robot model. So if you have a 3D printer, what better time than to try this robot Do not you think?

Full path to article: Free hardware » Arduino » They create a spider robot with a Prusa and an Arduino board