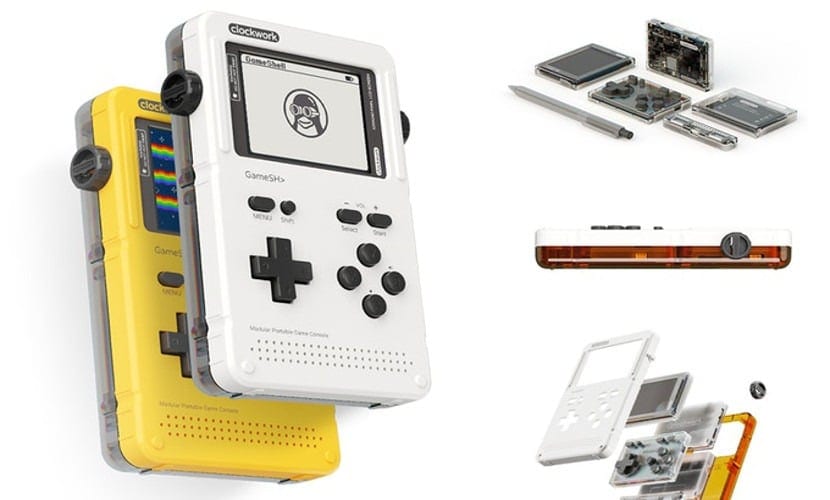 Retro video consoles are in fashion and although they usually do not have the power of the latest generation consoles, they do have more users and followers than these.

The Clockwork companies have realized this and have decided to launch a clone of the Nintendo GameBoy console. The most famous portable game console in history has a clone called GameShell. This clone is interesting because it improves aspects that the GameBoy does not have, such as a color screen, a rechargeable battery or a customizable keyboard.

GameShell is a game console built with Free Hardware, but unlike other consoles, this is a modular model. That is to say, that all its components are assembled and disassembled as we want, in such a way that we can change before a breakdown, before a new update or simply to keep each module separately.

The device's battery is a 1050 mAh battery that offers a range of 4 hours. The controls as well as the color screen have an interface that can be connected to any Arduino-like board. The motherboard or mainboard is an SBC board called Clockwork Pi, a board reminiscent of Raspberry Pi and has an AllWinner H20 processor with 512 Mb of ram.

Internal storage is provided from a microsd slot; GameShell communications are wifi connection, bluetooth, a GPIO port and a microusb port.

GameShell will be priced at approximately $ 89., but it will not be until April 2018 when we can acquire this device in stores, since at the moment it has only been presented through crowdfunding campaign.

Personally, it seems to me an original device and a gadget that could be quite interesting for many users, at least for younger kids and parents who won't have to buy another console when the screen or speakers break. Unfortunately, GameShell will have to wait a bit longer.