Raspberry Pi works for many as a minipc or an auxiliary computer. But its detractors always claim that it is not a powerful enough equipment for certain important operations. Here we are going to tell you how you can do with tasks or powerful software.

In this tutorial we are going to tell you how to watch and use Netflix, as well as other streaming video services that compete directly with Netflix, on our Raspberry Pi without using any external hardware or using the raspberry board as a silly client (well, some method if which uses the silly client operation to have Netflix on Raspberry Pi), for which we do not need exactly a Raspberry Pi board but any other hardware that can be connected to a screen.

Netflix is ​​a fairly popular web service due to its content and its price / quality ratio, but we must also say that it is quite restrictive and demanding when used on various platforms. Its mobile app cannot be installed on rooted smartphones or tablets and in Gnu / Linux its official application cannot be used due to certain missing libraries.
There are several methods to get the Raspberry Pi to play content from Netflix or other similar alternatives.
But first let's see the list of materials and / or accessories that we will need to make the Raspberry Pi work properly not only on the LCD monitor but also on the home television or other similar device.
For this we will need the following: 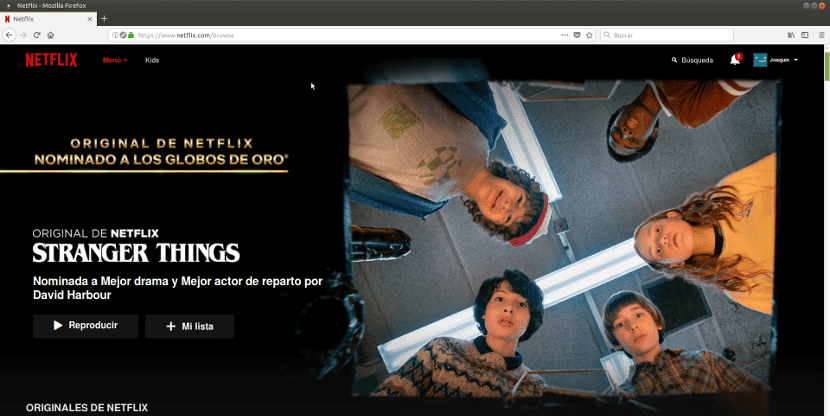 New versions of Mozilla Firefox allow the use of the Netflix web application. To do this, we only have to install it on Raspbian using the command:

This will install the latest version of the web browser and allow the use of Netflix on our Raspberry Pi. This method is the simplest and simplest of all those that exist for Netflix. For many the best option but it is also true that if we like Chrome, this is a problem, a big problem because they are not the same browsers, far from it. Another alternative is to install the latest version of Mozilla Firefox from the official Mozilla repositories. To do this we open a terminal and write the following:

The ExaGear company has created software to run x86 platform applications on platforms like Raspberry Pi. To do this we just have to install and run it. Then we can use Chrome for Windows as the default browser to watch Netflix movies and series.

We can get the ExaGear software through this link. Once achieved, we unzip the package and run the installation file as follows:

Now we have to execute it as follows:

And we update the software to have as few bugs as possible:

Now we can use Chromium with Netflix or simply go to Google Chrome web and download the installation deb package.

Related article:
These are the most common commands used on a Raspberry Pi

Although Chrome and Chromium start from the same project, they are not really the same thing, so many users watch Netflix on Chrome and not on Chromium. As with many other browsers like Epiphany, the problem is in the browser libraries and the use of elements with DRM. But there is a method that solves this problem in Chromium and it consists of the following.
First we have to download the latest version of Chromium for Raspbian, we do this by typing the following in the terminal:

Now that we have this updated version of Chromium installed, we have to add a very important and interesting tool for platforms like Raspberry Pi: the Browser Agent customizer. This plugin allows us to change the information that the web browser sends to web services and applications. The plugin for this browser is available here!. Once we have everything, we have to modify the agent or create a new agent and add the following data:

Now we select this Agent and then load the Netflix page. So the service will work and play any video without compatibility issues.

In the materials we mentioned above, the Raspbian ISO image was requested to install on microsd card. However, this we can switch to a version of Kodi for Raspberry Pi.
Kodi is a program that turns our Raspberry Pi into a media center, a multimedia center that we can use on the television in our living room or bedroom, making this a smart-tv.
Netflix is ​​generally not supported for Kodi, as Netflix is ​​a web app and requires a registration and key to work. But the Community has created an add-on for Kodi that makes it possible to use Netflix on Raspberry Pi. To do this we just have to download the add-on this Github repository and install it on Kodi as one more system add-on. After which the shortcut to Netflix will appear.

Throughout the article we have talked about him and the truth is that still a valid option for many users. Raspberry Pi allows us to work with the dumb client system, this means that we can play the content of Netflix or the Netflix application from a server and view it through our Raspberry Pi remotely. For this we will use a very useful program: TeamViewer.
TeamViewer is a program that will allow us to connect with any computer that has this application, without the need for large configurations or anything similar to a network administrator. In this case we have to connect with a computer that has Windows Chrome or Microsoft Edge and TeamViewer, then we will manage the desktop remotely from our Raspberry Pi. This method is the heaviest for our Raspberry Pi and even, due to the low power of the raspberry board, it may be the one that presents the most playback problems.

Today there are other services that are compatible with our Raspberry: practically all. The procedure that Netflix follows to offer visual content to its customers is used by many rivals, that is, the launch of an exclusive app or a web application. And it is in the latter where it conflicts with the Raspberry Pi. In short, using any of the methods we can make Raspberry Pi play any other rival Netflix service like Rakuten TV, Amazon Prime or HBO.

These methods are the most effective when watching Netflix or any other alternative. I personally prefer the Mozilla Firefox option or, failing that, the use of Kodi, two methods that consume fewer resources and that can make us have good times with these online entertainment services, a more real and interesting alternative than the old television with its ads Don't you think so?