One of the most practical gadgets I have tried is the IMAX B6 multifunction charger. A product that can be used to power a multitude of projects with Raspberry Pi, Arduino, since it allows charging batteries of different types that are used in projects of many makers.

All these DIY projects need power, and it is not always possible to leave the Arduino board connected to the PC's USB to power it or maybe you need a type of special food. It is also not possible, sometimes, to have a specific type of charger for each battery. With the IMAX B6 charger you can get what you need thanks to everything it offers you.

Also allows fast charge, thanks to a high-performance microprocessor and integrated software that is specifically adapted to each operation. You can get all the safety information in the product manual, which you should read when purchasing it so as not to use it unsafe or beyond its capabilities.

It also has an LCD screen as a display, with 2 lines and 16 characters to be able to choose the type of battery, protection programs, charging time, fast mode (charging time, maximum capacity are automatically adapted), and all the configuration options with its buttons. In addition, you will see the information of the battery so that it is in perfect condition to use it with the maximum charge. All safely thanks to its central chip ...

You can also charge and discharge Li-Po batteries cyclically, each cell individually, allowing you to revive cells and activate 100% of the battery. Therefore, it serves as a repair apparatus for bad batteries.

Between their exits, it has 5 for micro connectors to connect the cells, plus an output of two banana plugs to connect load power if you need it. Includes a set of 5 different connection cables to fit almost all batteries on the market. An extra connection cable with crocodile clips allows an external battery to be connected to the power input. 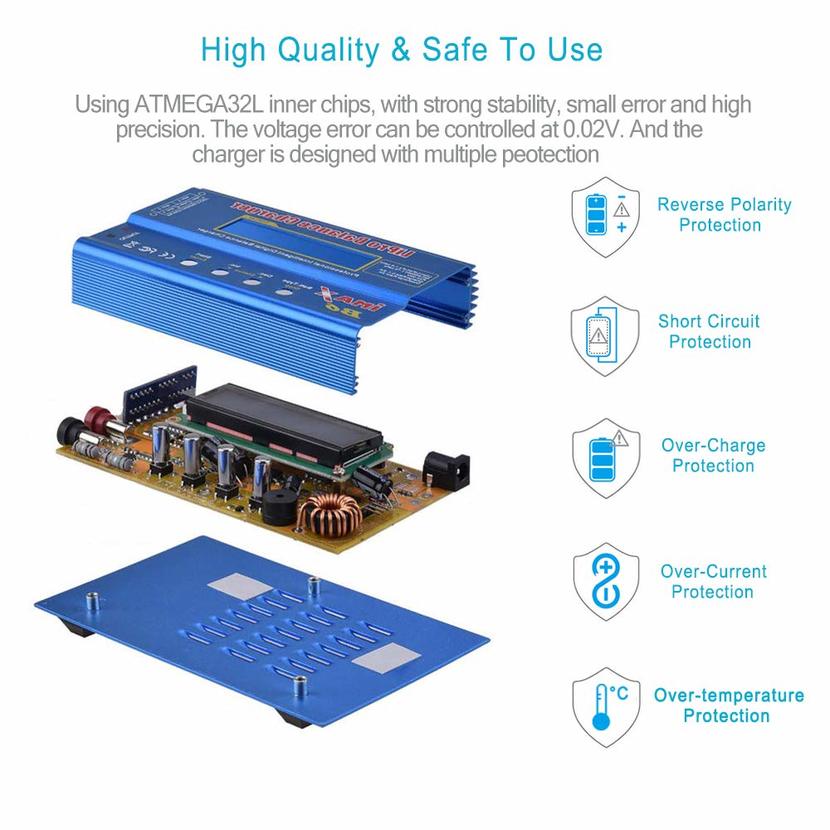 Between other technical characteristics of the IMAX B6 you will find:

You can find the IMAX B6 in a multitude of online and specialized stores, such as buy it on amazon. Its price is quite cheap, and for just over € 30 you can have this complete charging device.

En the package is included the IMAX B6 charger itself, the multifunction cable and various adapters, 1 universal crocodile-type clip, and the adapter to connect the charger to a conventional power outlet, as well as the instruction manual.

If you are interested in the IMAX B6, maybe you are also interested know about the relay module of Arduino to also control devices of greater power. You may also be interested in the TP4056 module, a module for battery charging that we have already described here. And even the batteries CR2032.

Types of batteries and accumulators

HR batteries, cells or accumulators, are devices that allow to store electrical energy in cells or produce it from chemical reactions. There are two main types of batteries, rechargeable and non-rechargeable. The former allow energy to be charged over and over again for reuse, while the latter are for single use and must be discarded.

Regarding their composition, they can be found various types of batteries main that you can use with this IMAX B6 mostly. Some of the most important are: