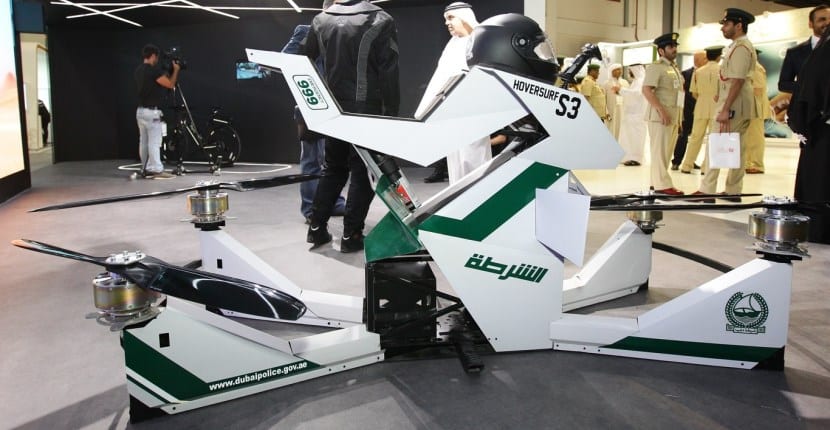 Dubai It is usually a city that tends to like new technologies a lot and above all to be the first to have them. Due to this, it is not surprising that they tell us about the implementation of programs to deliver packages and medicines with drones, drones that are dedicated to the transfer of people and, how could it be otherwise, drones for police with which to chase and stop all these new technologies.

With this in mind, surely now something as simple as that during the celebration of the Gitex Technology Week, one of the most popular technology fairs in Dubai, the vehicle you see on the screen has been presented, nothing less than a hoverbike for the police in charge of monitoring security on the city's streets that, according to what has been communicated, will begin to be used in the very short term.

As you will surely remember, since it is not the first time that we talk about this vehicle, this hoverbike has been designed and manufactured by the Russian company specialized in the design and manufacture of drones. hoversurf. Going into a little more detail, highlight that the vehicle you see on the screen is capable of reaching the Meters 5 carrying a weight of up to 300 kg. The maximum speed at which it is able to move rises up to 70 km/h.

In addition to all the above, rule out, or at least the company has confirmed it, that the hoverbike is capable of flying without the need for a human to be at the controls since can be remotely controlled by remote control and it is equipped with enough sensors to detect obstacles and even any type of anomaly that may be encountered while you are flying.

Full path to article: Free hardware » Drones » Dubai police show off their new hoverbike with which they will patrol the streets