Every day new inventions are announced in the form of devices, which in most cases are of little use to anyone. Of course, in some cases these inventions are revolutionary and have a huge amount of utility in the day-to-day life of any human being. The one we show you today, a tritium powered flashlight, We could place it in those of little use at first, although as the article goes on you will realize that without a doubt it has a gap in those of enormous utility.

And it is that this flashlight works as we have already said with tritium, also known as Hydrogen -3, which is nothing more than a radioactive isotope that causes light in the dark. The great advantage is that neither batteries nor batteries are necessary for this small flashlight to work in any situation.

As we said previously, tritium is a natural isotope of hydrogen, which is radioactive and whose nucleus consists of one proton and two neutrons. This is produced by bombardment with neutrals free of lithium, boron or nitrogen targets. One of the most important applications of tritium is its use as a nuclear fuel to obtain a large amount of energy through so-called nuclear fusion.

Its chemical symbol is T, although the symbol is normally used 3H to designate it. It was discovered in 1934 by Rutherford, Oliphant and Harteck in the study of the bombardment of deuterium with deuterons.

This isotope may not be the most suitable for creating a flashlight, within the reach of everyone, since it is radioactive, although it has low energy emissions, being the isotope that emits the lowest level of energy by beta radiation of all isotopes . Its half-life is 12.4 years and it emits very low energy β radiation (0,018 MeV).

Tritium is in the sights of many experts as seeks to achieve controlled fusion with deuterium. If this is achieved, there would be an energy source that, unlike the current nuclear one, would be clean and inexhaustible. The product of the fusion of the two is helium, which is not radioactive.

Although we are talking about tritium as a material that emits β radiation, it is of very low energy, which means that it has practically no radiotoxicity. This means that tritium is not an excessively dangerous element for its increasing uses, apart from the production of energy through nuclear fusion of which we have already spoken.

In addition, one of the clearest signs that tritium does not pose any danger to people is that more and more objects are sold in which this material is used. In this article we are going to see a few, which you can buy in the simplest way, for example through Amazon. Does anyone really believe that Amazon would sell products with tritium if they were dangerous?.

A flashlight that does not need batteries or batteries, but is really expensive

From distant Greece has come to light, a new gadget that is a flashlight, quite special and it does not need batteries or battery to work in any situation. It works with tritium, also known as Hydrogen -3. As we have already seen, it is a radioactive isotope that gives off energy in the form of light, which allows, by printing a housing for the isotope, to use it as a flashlight.

Its price is the big problem with this device and that is that tritium is not cheap at all since a gram costs approximately $ 30.000. Of course, you can rest assured that you will not need a gram to create this flashlight, since otherwise we would be talking about the most expensive flashlight in history. To create this flashlight, a resin vial is printed with a little tritium inside that has an approximate cost of $ 70. There is no doubt that it is not a cheap flashlight, but in return you will never have to buy batteries or think about whether you have charged the battery or not.

In addition and as a curiosity, we can also use this flashlight as an opener since the housing to house the tritium has been designed to perform other functions.

Also working on a ring with Tritium

The work with Tritio and 3D printing are having great success and at this point not only is this keychain-flashlight being sold, but they are working on a luminous ring that has the same lighting effects but that works as a fashion accessory.

Although the idea is very good and it may work as lighting, it seems risky for people to walk around with isotopes, not because of the danger of explosion or something like that but because of the simple fact of radioactive contamination, silent death, still the plane and the gadget is curious and is one more way of what can be done with a 3D printer.

Other products with Tritium that you can buy on Amazon

Here are some products with Tritium, which you can buy right now through Amazon; 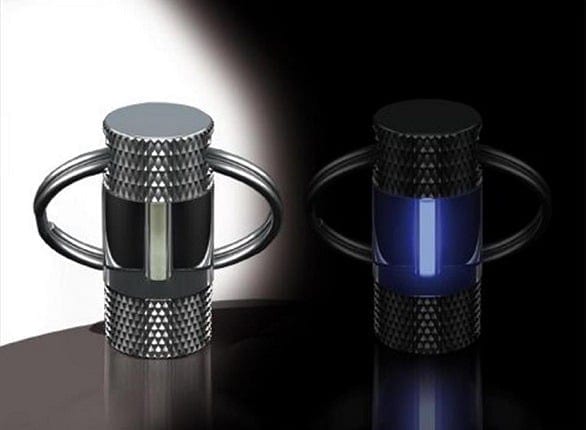 For less than 20 euros you can buy this keychain, made with Tritio and that will allow you, for example, to put the keys in the locks in the middle of the night without the need for a flashlight to which we would have to change the batteries from time to time.

Currently on the market you can find a large number of watches in which tritium is used to illuminate the hands or numbers on the dial. This Swiss watch that we show you is just one of the many examples that you can buy today on Amazon.

What applications can you think of thanks to tritium?. Tell us in the space reserved for comments on this post or through any of the social networks in which we are present.

Full path to article: Free hardware » 3D printing » They print a Tritium flashlight that shines for 20 years without changing the batteries