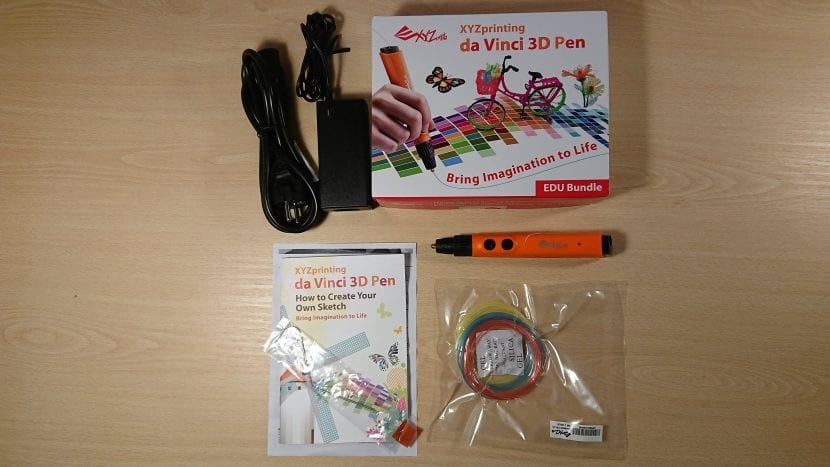 At the beginning of each school year, all parents go like crazy buying books, clothes and preparing their children for their return to school, it is possible that in some of the countless visits you have made and will make to the shopping centers you will a product has attracted attention in the exhibitors of the shops that are generally called "3D Pen".

Te we will explain what is and how do they work really these 3D pens, plus we will analyze in detail the XYZprinting Da Vinci 3D Pen that the manufacturer has kindly given us for this article.

A 3D pen is actually a mini 3D printer, only instead of having a system that takes care of calculate extruder position at every moment we will have our expertise and ability. In addition, since they are not limited to movement in the 3 axes of a fixed system we can be very flexible when incorporating material into our creation. We lose accuracy in printing but gain flexibility in design.

All 3D pens consist of basically from the same parts. A nozzle that heats and melts the filament, for an extruder that is responsible for dragging the filament towards the nozzle and electronics to control the whole. From here, each manufacturer designs their sets with more or less success, focusing on some of the aspects that they want to highlight about their product. Later we will explain what aspects XYZprinting wants to highlight in your 3D Pen 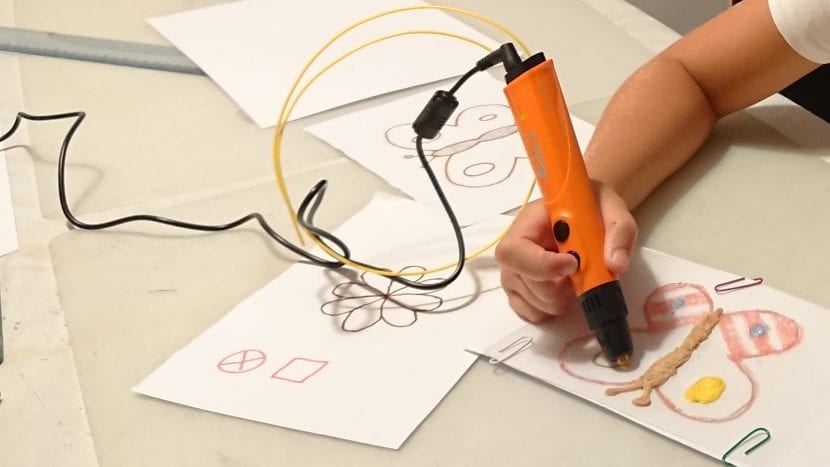 With a l128 mm long, 28 mm wide and just 70 gr we talk about a device very manageable, which we can use for long periods without making us heavy or causing discomfort.

The 3D Pen has a bright orange plastic finish. One of his side can be removed so that we access its interior. This detail allows us to better understand the operation of the device and we greatly facilitates cleaning, resolution of possible problems or filament change. Although we throughout the time that we have used the 3D Pen has had an exemplary behavior without causing any jam and without the need for the cleaning tool. 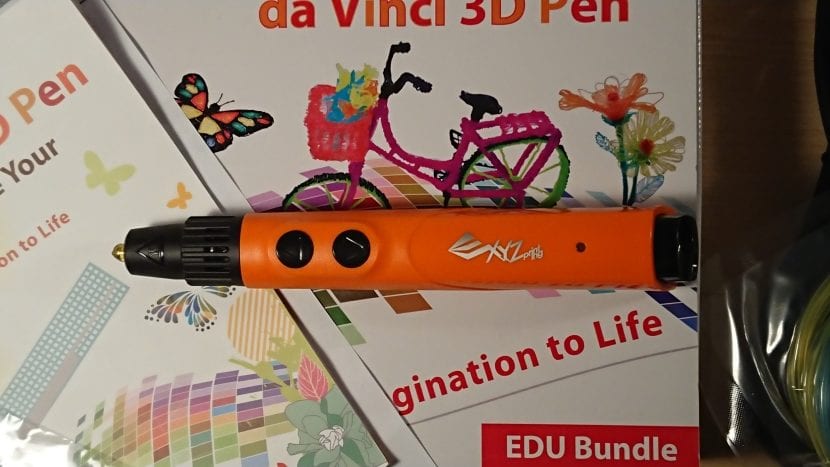 In the front of the pen we find 2 buttons a of them does advance filament so that it reaches the mouthpiece  and let it be extruded hot stuff, the other pulls the filament back to be able to replace it with a different material. We can also appreciate a small led that will light up flashing red when the device is warming up and will stay solid green when we can use the tool.

El power connector is in the rear so that the cable is the least annoying possible while using the device, in this sense a connector that does not make a 90º angle it would have been more suitable than the one currently incorporated. Possible improvement for future versions. 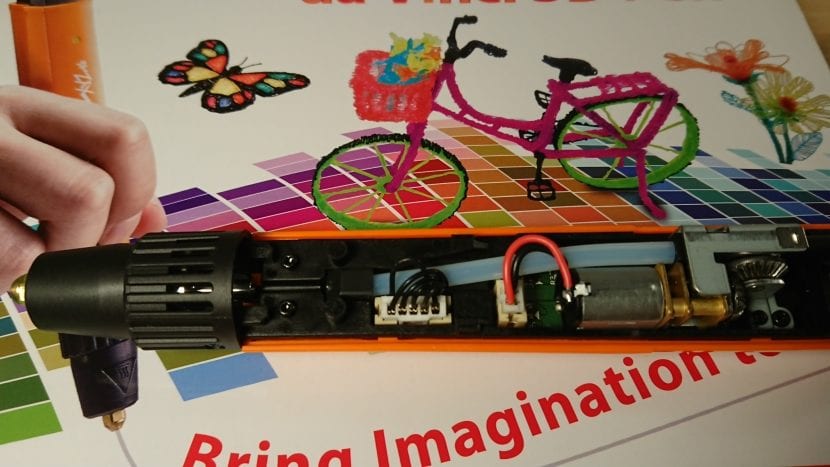 If we open the lid that gives us access to inside we observe that the toothed wheels who are in charge of displace the filament are almost at the end and through a PTFE tube is accompanied towards the tip of the pen. When the loaded filament is so short that these wheels cannot pull it, it will be time to insert a new one through the hole located next to the power connector. The new material will move the old material towards the tip nozzle.

We have to think that filament PLA melts at 190º roughly this means that metal mouthpiece what do we see at the tip has to be to exactly that temperature, It's very important do not touch our skin with it at no time because it would cause us a burn. 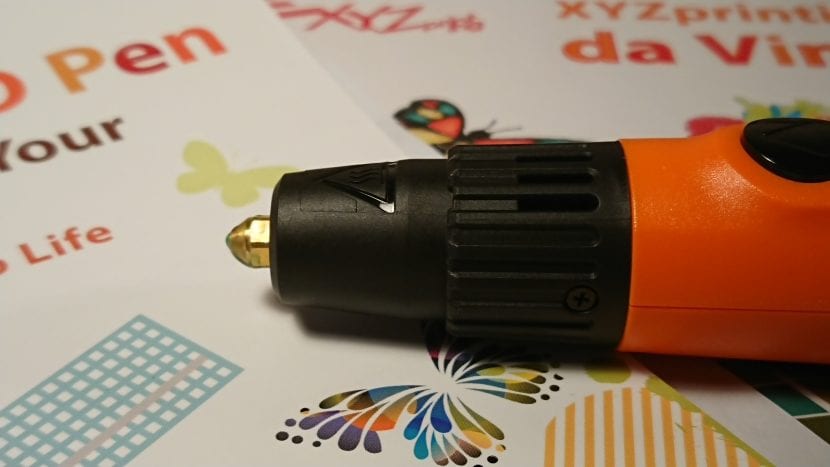 We can think that if the tip is so hot the whole tool will be. Nothing is further from reality, the clever design that the manufacturer has implemented makes right after the mouthpiece that is heated there is a area take care of dissipate all heat. In this way we can take the pen with the peace of mind that it will not burn us in the hand.

XYZprinting's 3D Pen uses 1.75mm PLA plastic in diameter as a consumable material and is capable of extrude it at a speed of 50 mm / s. The product accepts PLA filaments from any manufacturer, We we tested with samples of more than 5 including a wood filament and we have had no problems with none of them. Although it is true that depending on the hardness and composition of the different materials tested, we have detected that some flow faster than others.

Si during printing of our projects we want change the filament for one of another color we can do it in a very simple way. Holding down the "back" button, the device will eject all the filament from the outside, being ready to introduce the new material chosen. 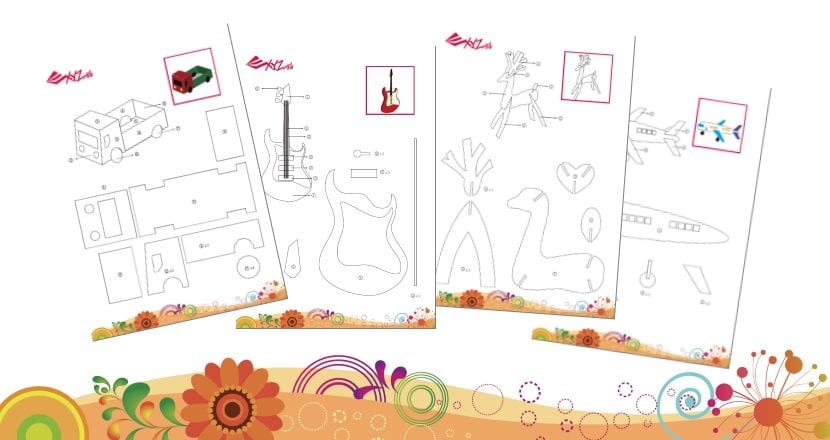 The product loaned by the manufacturer is called EDU BUNDLE, is a package that in addition to the basic content includes double the filaments and a USB in which we can find the manuals that come in the box in digital format, several demonstration videos that can clarify any doubts that remain after reviewing the manuals, a dozen additional templates of objects and the XYZMaker software.

The product incorporates a plastic surface on which to make our first impressions and a little book with various templates and the steps to build some curious objects. It also incorporates 6 samples of 1m of PLA filament of different colors, more than enough to start playing with the 3D Pen.

In the video below we show you what the package contains and our first clumsy attempts to use it. It may seem simple to be able to make complex objects requires some expertise.

We have used 2 volunteers aged 8 and 10 to see if it is really so advisable to leave a product of these characteristics to a child. Both have understood right away that there is a part of the pen that it should not be touched under no circumstances and have quickly grasped all the details of its operation.

The only point I know has made them difficult to control is the correct distance between the 3D Pen and the surface on which we are printing. With a little help and supervision both volunteers have been able to perform the pretty ones butterflies that I detail below. 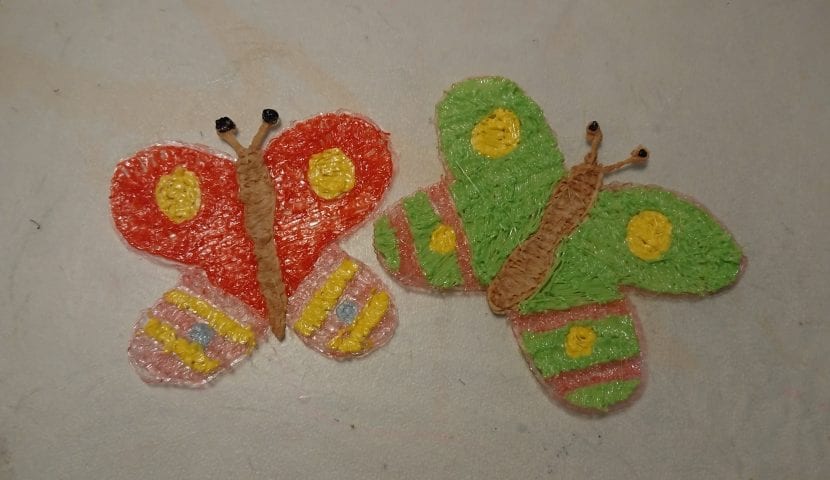 Despite the device safety and ease of use, because a part of it reaches high temperatures, we do not recommend leaving this (or any 3D pen) in the hands of a child without adult supervision.

The manufacturer XYZprinting you have for sale two different packages, normal package It contains 3 samples of filament and the pen and has a cost of 50€. He EDU Bundle package, which is the product that we have analyzed, incorporates 3 additional filament samples and a USB with manuals, software and templates. The price of this packaging is 90€ . 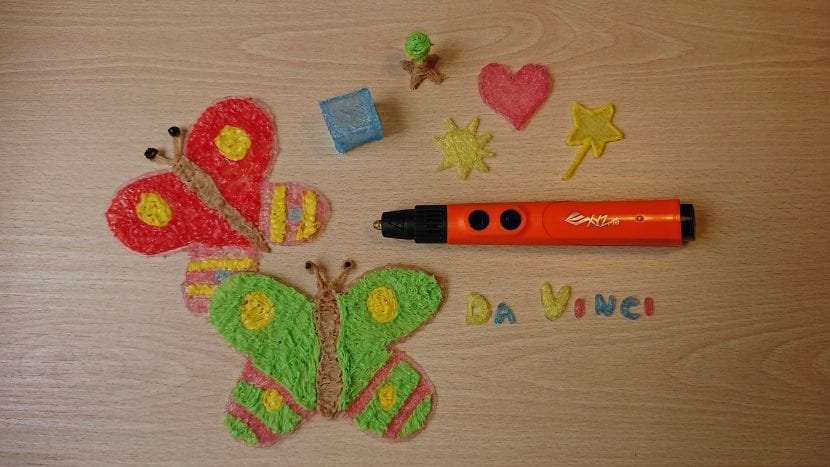 We are facing a product simple to use, safe, robust and reliable. That has been created with the necessary ergonomics so that your use for hours be made of a very comfortable mode. The device at all times perfectly fulfills its function and extrudes PLA perfectly regardless of the material we use.

With the XYZprinting Da Vinci 3D Pen rest assured that you will spend countless hours in which your only concern will be the originality of your creations. It is also a highly recommended product to give to children, perhaps a good way to reward that they have started the new course with so much enthusiasm.

Points for and against