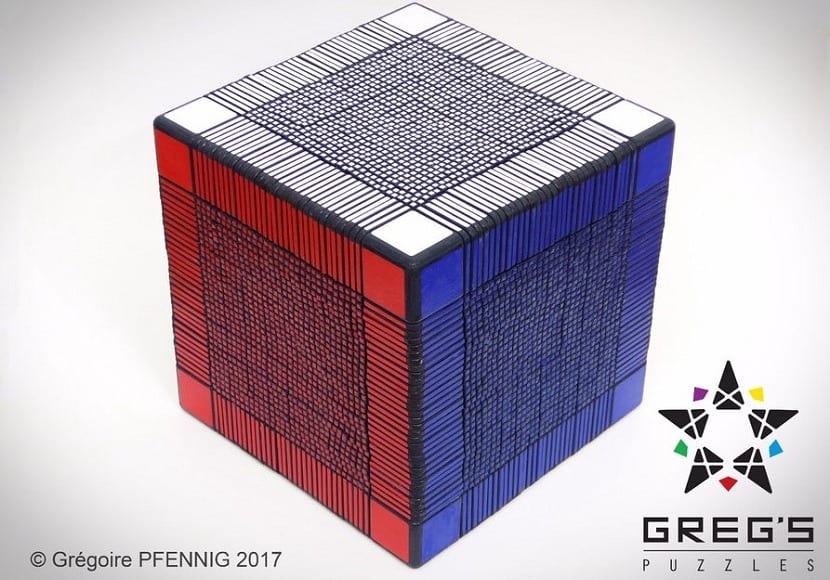 Many are fans of solving something as simple for many and complex for others as the Rubik's cube. For those who are somewhat simple with the traditional cube, there are many other bets and more complex formats, although none as large as the one designed and manufactured Gregoire Pfenning at 23 years old.

As a detail, before continuing, tell you that today it has already been classified as the largest Rubik's cube on the planet thanks to its measurements. To put this a little more in perspective, tell you that until now the title fell on a version made in 2011 that stood out for its 17 frames on each of its sides. In this version we talk about nothing less than 33 frames per side.

Grégoire Pfenning is the author of what is considered to be the largest Rubik's cube ever made.

According to statements made by himself Gregoire Pfenning:

There is a power of 1,8 to the power of 10 in this Rubik's cube, that is, about 4.099 possible configurations. I have designed something that is beyond me. I wouldn't risk undoing it to figure it out.

I spent 25 hours designing the project from the software. Then I sent all the data to the Netherlands for the parts to be printed with a 3D printer by laser sintering. It has already taken me 40 hours to order the parts that arrived in the mail. Then I had to organize them, stain them, stick the labels, smooth the surfaces ...

It is a passion that combines the technical side and the design. For a while, I also did computer riddles, but that made me very tired. I like to create more original shapes and styles.

My 33 X 33 X 33 Rubik's Cube costs € 15.200. Fortunately, its creation was sponsored by the three-dimensional printing company 3D Print Fabriek, which financed 60% of the manufacturing cost.

Full path to article: Free hardware » 3D printing » They manufacture the largest Rubik's cube in the world thanks to 3D printing