With Arduino can create large number of projects as you have seen if you read Hwlibre, programming the microcontroller in a simple way. But among the analog and digital connections of this free hardware board, there are some that are still somewhat unknown to many beginners, such as the true potential of the PWM connections, the SPI, the RX and TX pins of the serial port, or the own I2C bus. Therefore, with this entry you can at least know everything you need from the I2C.

With the I2C bus you can connect and use many third-party devices that have this type of protocol to communicate with the Arduino board. Between them, you can connect accelerometers, displays, counter, compasses, and many more integrated circuits thanks to this Philips invention.

I2C refers to Inter-Integated Circuit, that is, inter-integrated circuit. It is a serial data communication bus developed in 1982 by the Philips Semiconductors company, which today is NXP Semiconductors after getting rid of this section. At first it was created for televisions of this brand, to communicate several internal chips in a simple way. But since 1990 the I2C has spread and is used by many manufacturers.

Currently used by dozens of chipmakers for multiple functions. Atmel, the creator of the microcontrollers for Arduino boards, introduced the TWI (Two Wired Interface) designation for licensing reasons, although it is identical to I2C. But in 2006, the original patent expired and is no longer subject to copyright, so the term I2C has been reused (only the logo continues to be protected, but its implementation or use of the term is not restricted).

El I2C bus has become an industry standard, and Arduino has implemented it for communication with peripherals that need it. It only needs two lines or cables for its operation, one for the clock signal (CLK) and the other for sending serial data (SDA). This is advantageous compared to other communications compared to the SPI bus, although its operation is somewhat more complex due to the additional circuitry required.

On this bus each device connected to it has an address used to access these devices individually. This address is fixed by hardware, modifying the last 3 bits through jumpers or switch DIPs, although it can also be done by software. Each device will have a unique address, although several of them may have the same address and it may be necessary to use a secondary bus to avoid conflicts or change it if possible.

In addition, the I2C bus has a Master-Slave type architecture, that is, master-slave. This means that when communication is started by a master device, it will be able to send or receive data from its slaves. The slaves will not be able to initiate the communication, only the master can do it, and neither can the slaves talk to each other directly without the master's intervention.

It tienes several teachers on the bus, only one can act as a teacher simultaneously. But it is not worth it, since the change of teacher demands a high complexity, so it is not frequent.

Keep in mind that the master provides the clock signal to synchronize all devices on the bus. That eliminates the need for each slave to have their own watch.

The I2C bus protocol also foresees the use of pull-up resistors in the supply voltage lines (Vcc), although these resistors are not usually used with Arduino pull-up because programming libraries as Wire activates the internal ones with values ​​of 20-30 k. This may be too soft for some projects, therefore the rising edges of the signal will be slower, so lower speeds and shorter communication distances can be used. To correct that you may need to set external pull-up resistors from 1k to 4k7. 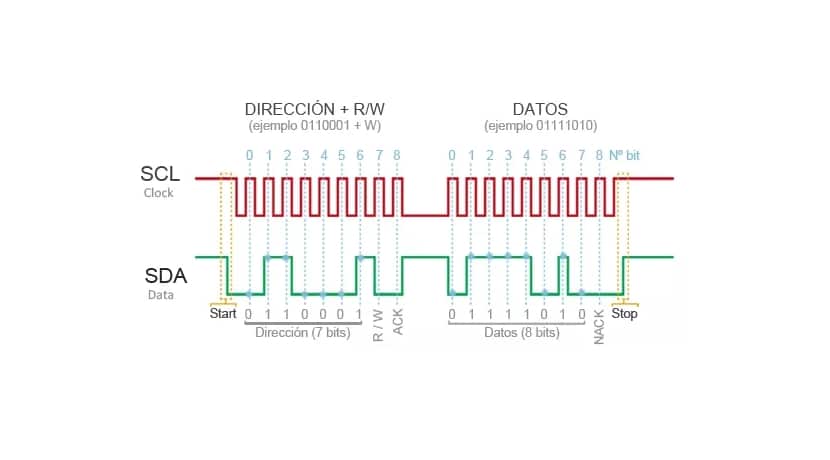 La communication frame of which an I2C bus signal consists of the bits or states (those used in Arduino, since the I2C standard allows others):

In addition, the clock frequency for transmissions is 100 Mhz as standard, although there is a faster mode at 400 Mhz.

Advantages and disadvantages of the I2C bus

HR and advantages are:

En Arduino, depending on the model, the pins that can be enabled to use this I2C bus vary. For example:

Remember that to use it you must make use of the library Wire.h for your Arduino IDE codes, although there are others like I2C y I2Cdevlib. You can read the documents of these libraries or our articles on the projects that interest you to obtain codes of how it would be programmed.

How to know the address of a device to use it with I2C?

Just one last warning, and that is that when you buy ICs from European, Japanese or American manufacturers, you indicate the direction you should use for the device. On the other hand, the Chinese sometimes do not detail it or it is not correct, so it will not work. That can be easily solved with an address scanner to know which direction you should refer to in your sketch.

La arduino community has created this code to scan the address and identify it In a simple way. Although I show you the code right here:

Full path to article: Free hardware » Arduino » All about the Arduino I2C bus