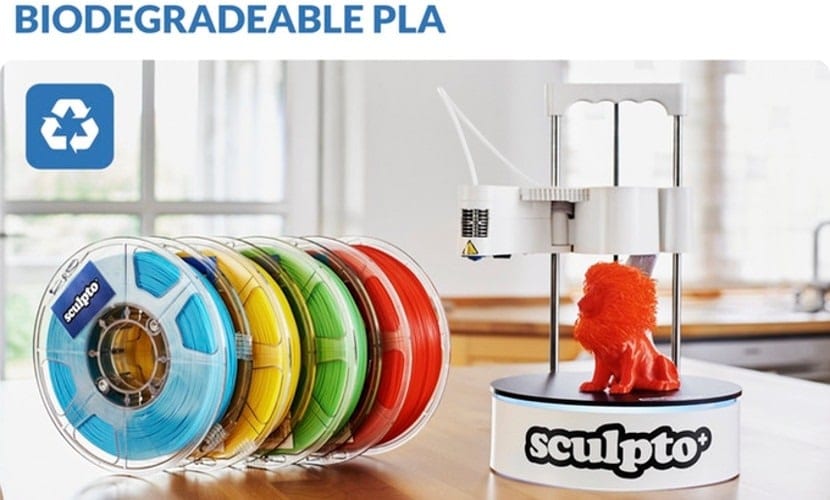 3D printers are becoming cheaper and cheaper, but it is also true that the milestone of 500 euros is serving for new models of 3D printers that try to stand out in something or in a specific aspect. Many could say that Sculpto + is such a 3D printer although personally I think it is a model that gathers all the functions that the next generation of home 3D printers will have.

Sculpto + is a small 3D printer, that overcomes rigid design to result in a cylindrical design that can be better adapted to the domestic scene than models like the Prusa. It also seeks ease of use as well as savings on cables and electronics that make the printer a device vulnerable to shocks and accidents.

Sculpto + is a cylindrical-shaped printer that does not have any wired connection, that is, its connection is wireless, thanks to its Wi-Fi module. This will allow us to print any object using our smartphone, a device increasingly related to 3D printers.

Sculpto + weighs 1,22 Kg, being one of the lightest 3D printers that exist for the domestic world. Unfortunately, Sculpto + does not allow printing of various materials, only we can use plastic that is reusable and biodegradable.

Sculpto + cannot be purchased at the moment as it can only be obtained through crowdfunding campaign, but the campaign has been a success so in a few weeks This new 3D printer will be marketed at a price of 500 euros. The printing measurements of this model reach 200 mm in width and 160 mm in height, nothing special, but sufficient for many home users.

Sculpto + does not present anything new, I know, but it does bring together many functions or features that the 3D printers of the future will have, so it is not strange to think that be the first next generation 3D printer Do not you think?