There are many types of semiconductor diodes, with very diverse applications. From the rectifier diodes, through the Zener, to the LEDs that emit light. In this article we are interested an electronic component concrete, the 1n4148 general purpose diode. It will be the one that we analyze in terms of its characteristics and we will show some of the possible applications.

The 1n4148 is a small silicon unit that hides great secrets that you should know. A component that can contribute a lot to your projects if you like electronic DIY or are a maker ...

What is a semiconductor diode?

Un diode is a semiconductor device It acts as a solid-state switch and one-way for current. Although there are exceptions, such as the LED or IR diode, which emit an electromagnetic wave. In the first case, a visible light of some color, or infrared radiation. On the other hand, in this article, since we will talk about 1n4148, we are only interested in those that act as current disruptors.

The word diode comes from the Greek, and means "two ways". Despite this, what it does is precisely the opposite, that is, it blocks the flow of current to the other direction. However, if the characteristic IV curve of the diode is appreciated, it can be seen that it consists of two differentiated regions. Below a certain potential difference it will behave like an open circuit (not conducting), and above it like a short circuit with very little electrical resistance.

These diodes have a union of two types of semiconductor P and N. And they also have two connection terminals, an anode (positive terminal) and a cathode (negative terminal). Depending on the way in which the current is applied, two configurations can be differentiated:

Here we are focusing on one type of diodes. The thing varies with photodiodes or LEDs, etc.

These components were created based on the principle of the Lee De Forest experiments. The first to appear were large vacuum valves or vacuum tubes. Thermionic glass ampoules with a series of electrodes that served as these devices, but emitted a lot of heat, consumed a lot, were large, and could be damaged like light bulbs. So it was decided to replace it with solid state components (semiconductors).

Diodes, such as 1n4148, have multitude of applications. They are very popular devices in direct current electronic circuits and also in some alternating current ones. In fact, we already saw how in the power supplies they fulfilled a very important task when going from AC to DC. That is their aspect as rectifiers, since they change a sinusoidal current signal for a continuous one in the form of pulses by blocking the current in the opposite direction.

They can also function as electrically controlled switches, as circuit protectors, as noise generators, etc.

Diodes can be classified according to the voltage they tolerate, the intensity, the material (eg: silicon), and other characteristics. Some of the most important types are:

El diode 1N4148 It is a kind of standard silicon switching diode. It is one of the most popular used in the world of electronics. It is also very durable, as it has very good specifications despite its low cost.

The name follows the JEDEC nomenclature, and is very useful for switching applications up to approximately 100 Mhz frequencies with a reverse recovery time that does not usually exceed 4ns.

Texas Instruments created in 1960 the diode 1n914. After its registration a year later, more than a dozen manufacturers acquired the rights to it to manufacture it. In 1968 the 1N4148 would arrive at the JEDEC registry, beginning to be used in military and industrial applications at the time. At present there are many who produce and sell these devices both under the name 1N4148 and under the 1N914. The differences between the two is practically the name and little else. They only differ in their leakage current specification.

Pinout and packaging of the 1n4148 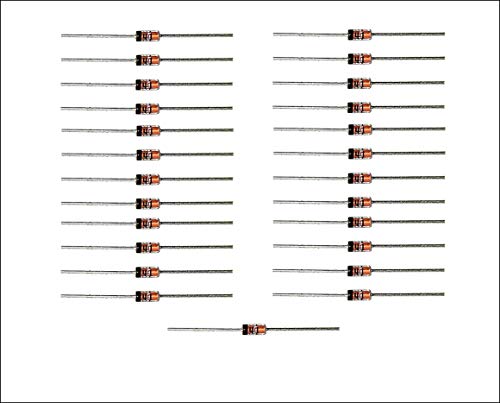 1n4148 diode usually comes packaged under DO-35, with an axial glass envelope. You can also find it in other formats such as SOD for surface mounting, etc.

As to Pinout, it only has two pins or terminals. If you look at the black stripe on this diode, the end closest to that black stripe will be the cathode, while the other end will be the anode.

If you wish to buy a 1n4148 diode You should know that it is a very cheap device, and you can find it in specialized electronics stores or on the internet in surfaces such as Amazon. For example, here are some recommendations: